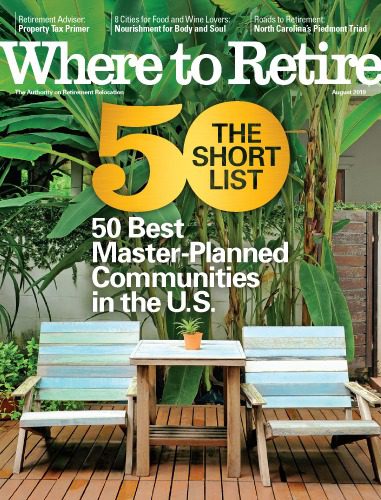 Premier Master-Planned Community Recognized by Where to Retire

RICHMOND, VA – (Monday, June 24, 2019) – Harpers Mill, Chesterfield’s premier master-planned community, was recognized by Where to Retire on the magazine’s “The Short List: 50 Best Master-Planned Communities in the United States.”  The selected 50 best master-planned communities showcase the variety of housing options and amenities that enrich the lives of relocating retirees.

Devoting more than 240 acres to nature’s beauty, Harpers Mill boasts a five-mile trail network that winds through woodlands and green spaces as well as an activity lawn that hosts cornhole competitions, family picnic and community events.  “The social atmosphere was one of the things that attracted me,” said a resident of Harpers Mill.

Featuring first-person testimonials by current residents, the Where to Retire list is the only one of its kind, focusing on communities rather than locales.  The evaluation process began nearly a year ago, with editors choosing only established neighborhoods with enough acreage to build at least a year’s supply of homes.  The 50 communities come from 17 states nationwide.

As the authority on retirement relocation since 1992, Where to Retire has covered hundreds of the best retirement regions, towns and master-planned communities.  The magazine is published six times a year and has a national circulation of 200,000.

Harpers Mill is a thriving master-planned community with over 1,200 acres of living space and an abundance of opportunities to enjoy life.  Tucked away just moments from the Hull Street corridor and only four miles west of Route 288, Harpers Mill offers convenience without sacrificing space.  With large wooded homesites and tall green pine trees, homeowners enjoy a luxury which is not found in any other master-planned community of its kind.  New resort-style amenities, a serene landscape, and an award-winning elementary school on site, come together to make this a dream community.  Learn more at HarpersMill.com.